If you guessed that Tex-Mex is short for Texas and Mexico, well done!

But what about Texas and Mexico come into the equation? And how did these two seemingly different cultures become so beautifully linked, so much so that it could evolve into a brand-new culture and cuisine of its own? Read on to find out!

Origins of the Term “Tex-Mex”

It might come as a surprise that the earliest uses of the term “Tex-Mex” was in fact nothing to do with food at all. First appearing in 1875, “Tex-Mex”, or more specifically “Tex. Mex.”, was used as an abbreviation of a railway line built to take domestic sheep from Texan ranches to the shores of the Gulf of Mexico.

This railway was later extended into the Mexican city of Nuevo Laredo via a bridge built across the Rio Grande river, making it the first rail connection between America and Mexico. Besides creating trade and business opportunities, it also brought about a greater mingling of cultures and inadvertently the resettlement of people across the border.

There therefore came about a particular group of people known as the Tejanos, who were basically Texans of Mexican descent, the offspring of the original Spanish-speaking settlers of the northern Mexican states during the Mission era. The term “Tex-Mex” was then used by American media in the 1920’s to label these folks.

It was the cooking of this group of people that would eventually become what we now know as Tex-Mex cuisine, and since the 1960’s the term “Tex-Mex” has come to be used almost exclusively to describe the cuisine rather than the people themselves.

Birth Of A Cuisine

As they resettled, the Tejanos brought with them essential ingredients like rice, olive oil, onions, garlic, oregano and cilantro, and a unique way of cooking they had developed which was basically a mix of Spanish cuisine and native Mexican style.

Cattle ranching culture, which was common to both southern Texas and northern Mexico, also started to exercise its influence on the food they ate, with increased prominence of beef, grilled meats, and tortillas in their diet.

As American goods and cooking equipment became more accessible and affordable, the cuisine started to feature non-traditional ingredients such as Colby Cheddar cheese instead of Mexican Cotija cheese, black beans instead of Pinto beans, and very interestingly, cumin. The use of flour tortillas, instead of corn, also became commonplace.

By then, the cooking of the Tejanos had evolved to become so distinctly different from traditional Mexican fare, that a line had to be drawn somewhere. It was in 1963 that an article in the New York Times Magazine became the first to call this cuisine “Tex-Mex”. A new cuisine was born.

While Tex-Mex cuisine started off as being a fusion of Texan and Mexican cuisine, it has over the years come to be known and respected as a standalone cuisine in its own right, unique and distinct from its parent cuisines.

A major milestone in the development of this modern and trendy cuisine was a 1972 book by influential food authority Diana Kennedy titled “The Cuisines of Mexico”, in which she explained the distinctions between Mexican cuisine and the Americanized Mexican food known as Tex-Mex.

Tex-Mex finally made its way to the shores of Singapore in the late 1990’s, with Santa Fe Tex-Mex Grill being among the pioneers of the cuisine since 1999 with its first outlet at Boat Quay along the Singapore River.

Check out our article “The Santa Fe Story” to find out more, and be sure to visit us at our current restaurant at 6 Purvis Street for a taste of authentic, hearty, delightful Tex-Mex! 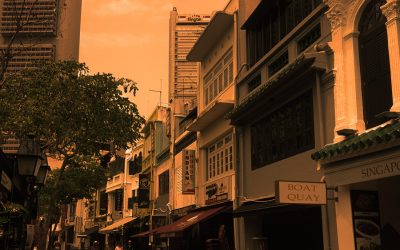 Santa Fe was among the pioneers of Tex-Mex cuisine in Singapore, with its first outlet at Boat Quay opening in 1999. Read all about the restaurant’s journey through the years…